Doesn't it make you a little sad when you put an outfit on your baby and it doesn't fit anymore? Liam has officially graduated to 0-3 month sleepers. His little toes were squished in his newborn sleepers so I had to pull out the next size. He is swimming in them a bit but they fit better. It won't be long until I have to completely move him to 0-3 month clothes. I give it a week, two tops! My little peanut, Kadence, has some more time in her newborns, although, I am excited to put her in all the cute 3 month outfits my friend Rachel gave me. 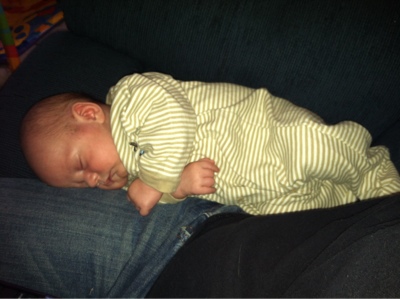 Posted by Delisa at 5:39 PM No comments:

I am from Phoenix, Arizona but currently live in Wisconsin. The town my mom lives in (Wautoma) has typical "small town" features. It's population is not unincorporated (which means that there's not enough people living there to count as a "population"), in fact, I remember the population sign said 1,996. I am sure that there are a lot more residents than that since that sign was posted. Nonetheless, you get an idea of how small it is. 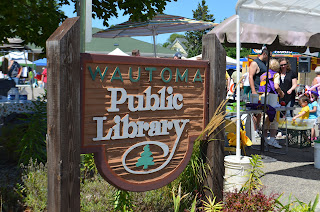 Every year they have an event called "Augustfest". There's is a craft fair in the little library parking lot. I love craft fairs because it is a great place to support your local "crafters" and also to get some ideas on stuff to make yourself! The craft fair also features some delicious Midwest snack like corn-on-the-cob dipped in butter and walking tacos.

My favorite attraction at "Augustfest" for Noah is the free, yes I said FREE, pony rides. You don't find the word "free" very often. 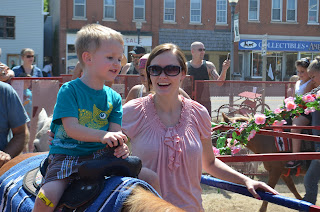 While we were at the craft fair there was a woman dressed as a clown and she was making balloon animals and other fun objects. She had a decent sized line in front of her packed with kids that I decided couldn't take extremely long. 10 minutes later and barely a dent made in the line, we walked away. Noah was a little bummed out but it was way too hot to stand in line and I didn't realize how long it took to make a balloon animal. Our second stop at "Augustfest" was the polka tent :)  We needed to feed the twins and we enjoyed some fine entertainment and shade while Noah was able to jump around in a bouncy house for a while (which was also FREE!). About 15 minutes after we arrived to the polka tent, guess who shows up!? Dizzy the Clown! And Noah got his sword and 2 laser guns. (2 because he popped the first one, cried, and Dizzy came over and made him a new one. Very sweet of her). 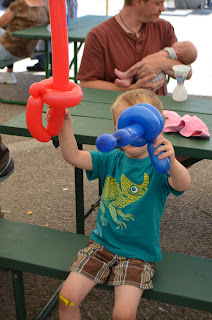 Our final stop after the polka tent was to watch the duck race. Maybe I should specify, the "rubber ducky race". Apparently the duck race is a huge deal. Each yellow rubber duck is $3 and the winner gets a trip to Las Vegas. We missed the release of the ducks so we made it to the finish line just in time for  a herd of yellow ducks coming down the little creak and men in waders ready to fetch the winners. My mom finds this tradition a bit creepy, like a scene out of a Stephen King novel. The picture shows only a fraction of the amount of ducks there were. There were hundreds of rubber duckies. They just kept coming.

The family friendly atmosphere, combined with free attractions and a craft fair made for a fun Saturday. The only thing missing was my hubby who is still training with the Marines until next weekend.

It never fails that no matter where we go with the twins, someone will stop to look at the babies and they will ask "the question".

First of all, the babies are about the same size and although they don't look exactly alike, it would be safe to assume that they are both mine. We are trying to think of witty things to say to people when they ask us this question.

Also, after we confirm that they are twins, then EVERY ONE asks if they are a boy and a girl. I dress my kids in very gender specific clothing. I am pretty sure 90% of Kadence's wardrobe has pink or flowers. Liam's wardrobe is either blue, or brown with other boyish colors. The only good comeback we can come up with for this question is "No they are both boys" or "No, they are both girls". What is funny is that when people ask these questions, THEY ALREADY KNOW THE ANSWERS!

I need some more funny suggestion on how to respond to those questions.

Posted by Delisa at 8:02 PM No comments:

Ok, my friend Brittany sent me a link for twin baby carriers http://www.twin-pregnancy-and-beyond.com/twin-baby-carriers.html  and a couple look decent, but the two above are ridiculous but they are the ones that you can actually use as the twins get older. The 3 below look more practical BUT they are only for smaller babies. The 2nd pic says its only for babies up to 10lbs. The one that I like the most is the 3rd pic which is a Moby Wrap. It is basically a really long piece of fabric that you wrap around yourself and it hold the baby in...and go figure, I already have one of these!! So, when I have an extra set of hands (because I won't attempt to try and wrap and put the babies in by myself I will post a picture of my success or failure and let you know if my shoulders aren't killing me after 5 minutes. BTW, the sling that I use right now with just one baby in it is a "seven sling". And I love it. You can get it at www.sevenslings.com 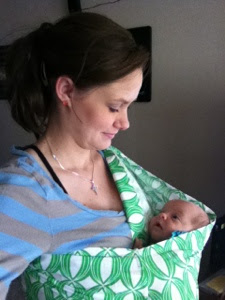 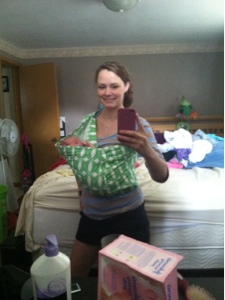 I just picked this up today at Walmart while I was looking for baby toys to put on carseat handles. This is a portable baby soother and it is pretty much just a little pillow that vibrates but I have a bouncer that I got before I had Noah and it doesn't vibrate anymore. I tried new batteries and everything and it is pretty much dead but it is a really comfy little bouncer. So I thought I would give this little doo-dad a try and the babies LOVE it! It really does
"soothe". Plus, it is portable so you can put it in their swing or their car seat (even though it says not to put it in their car seat), and a picture on the front of the box shows a mom holding her baby with the soother on baby's back. 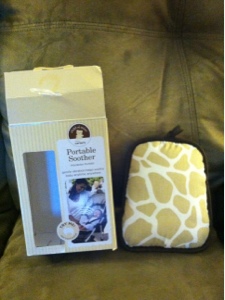 Definitely put one of these on your registry! It is one of those things that you never knew you needed.
Posted by Delisa at 9:45 PM No comments:

2 Weeks is how long my husband will be gone :(  He left this morning for his Marine Corps training. The house is a mess and the babies are fussy, go figure! So I guess this will be my tribute 2 weeks to single parents, except that I don't have to go to work. I couldn't imagine having 3 kids plus working. I suppose you would get into a routine that involved daycare and packed lunches and maybe working parents in general cherish the time they DO have with their kids. They can focus on quality, not quantity. Sometimes I feel like I don't use my time wisely. I need to do more crafts and learning opportunities for Noah. I would like to take him for bikerides and make sure he gets to the YMCA or the park every other day. It's not that I'm too lazy to do these things, I just have my hands full with the twins. I make sure Noah is enrolled in a class at the Y tho, that way he at least gets some social interaction with kids his age, and he gets to learn. Right now he is in a class called "Count Me In", of course, they are learning numbers. He brought home a worksheet with a bunch of 4's he practiced. I love the YMCA here, I'm really going to miss it when I move back to AZ. However, I'm hoping that I get to spend a little more "quality" time with the kids when I get there because I won't have as much to worry about and I won't be in my own messy house!

So today I spent half the day trying to clean up and I have nothing to show for it, the house is still a mess. The twins were taking turns crying. I don't know why they choose to be fussy on the SAME days, someone needs to invent a "twin sling", although the thought of that sounds dangerous. I would imagine it would look like a double decker where their heads were on opposite sides.

Even though I should be packing, I am finally trying to get organized. My lifesaver... plastic tubs. Noah's room is going to be full of plastic tubs that are labeled and organized. I also plan to get a bunch of tubs for my craft stuff since I won't have my own craft closet after we move. I'd like to have everything organized so that if I want something, I can just go to our storage unit and I won't have to rummage through everything to find something I want.

ORGANIZATION Is my #1 task during these next two weeks.

Posted by Delisa at 9:11 PM No comments:

Promote Your Page Too